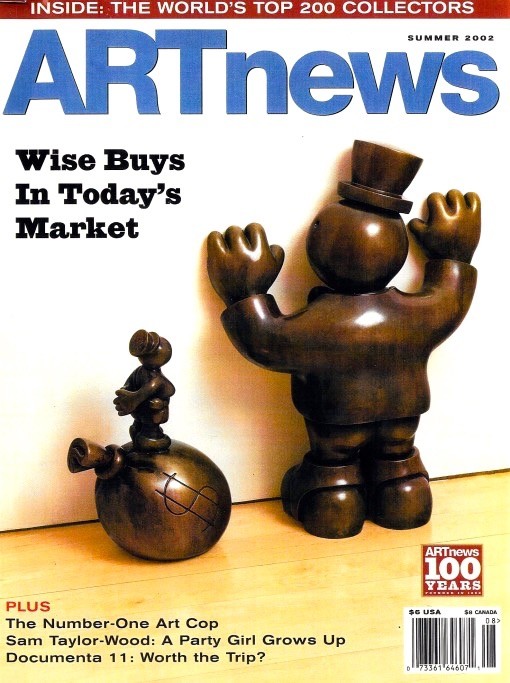 The Power of Suggestion

From Sex and the City to corporate headquarters, Kim Heirston helps clients put art in its place

In the rambling but sleek offices of a mid-Manhattan real estate-investment firm, Kim Heirston cuts a commanding figure. More than six feet tall in her high-heeled boots, she is everywhere at once: in the corner suite, directing a pair of art installers hanging a John Baldessari triptych; in the hallway, fretting over the placement of a Jeremy Blake video; and in a conference room, explaining plans for the art in a giant mall complex across town.

The Blake video installation, a long slab of a screen when unplugged, was intended for the president’s office, but the wall was too fragile to accommodate it. “I’ve installed lots of video things,” Heirston says, frowning and drawing a well-manicured finger across her lower lip. “It’s not much of an issue when you’re talking about a house, but this is a landmarked, preserved building, and a lot of the walls are brick.” She hovers over one of the installers as he cruises the Internet in search of a pedestal, and looks plainly unhappy with the idea of Black’s video screen atop a metal stand, a pairing that hints at home-entertainment centers. (Later, when an appropriate wall is found, she concedes, “That pedestal was never going to happen.”)

Making sure the right work goes in the right place for the right client is but one of Heirston’s tasks as an art adviser. Prior to today’s hands-on supervision at the offices of Argent Ventures, she had met with the firm’s president, Andrew Penson, numerous times—sounding out his vision for the art in his office, scouring galleries, and attending auctions and art fairs. Early on in the yearlong project, they settled on a vaguely geometric/biomorphic theme, and now the company’s walls hum with Calder and LeWitt gouaches, a Sherrie Levine game board, Jorge Pardo ink drawings on glassine, and a cheerful Donald Judd relief. Dan Walsh, James Welling, and Nathan Carter add to the mix, and the original parameters have stretched to include paintings by Francesco Clemente and David Salle.

Penson is pleased with both the art and the adviser. “She’s not shy to tell me that this is something that would really work. I was equally not shy to tell her I didn’t think so. At the end of the day, the decision was up to me. I never felt any kind of pressure.” His familiarity with contemporary art was admittedly sketchy before he met Heirston, but his horizons were broadened, he says, “by her depth of knowledge—of the history of modern art and where we are today. She seems to know everybody in the business.”

Art advising, or “consulting,” is a nebulous and tricky field. No licensing is required, and anyone who has a vague acquaintance with art and entrée into a few galleries can hang out a shingle. The exact number of advisers in New York is impossible to calculate, but a few names stand out—Thea Westreich, along with Barbara Guggenheim and Abigail Asher of Guggenheim Asher Associates.

Now seems to be very much Kim Heirston’s moment. The 38-years-old Yale graduate has been written up in the New York Times and Vogue; her elegant East Side apartment was featured in Elle Décor last fall. She acted as HBO’s adviser for some initial episodes of the hit series Sex and the City, which included coordinating the art for shots of Mr. Big’s downtown loft and scenes set in a SoHo gallery. Heirston, who worked her way up through the gallery system, today advises clients ranging from Hollywood moguls to Wall Street investors to novelists Salman Rushdie and Tom Clancy. “She’s got this killer combination of intellect and enthusiasm,” says Clancy’s wife, Alex, the collector in the family, who was steered toward Heirstons’ services by Thelma Golden, deputy director of the Studio Museum in Harlem.

“Kim’s strength is that she helps her clients develop their own tastes rather than saying, ‘This is what I want you to buy,’” explains Amy Cappellazzo, a specialist in postwar and contemporary art at Christie’s. “She encourages them to develop a sensibility, to do that kind of exploration that helps them come to their own esthetic.”

Heirston was not always headed for a career in the art world. An only child, she grew up in Huntington, Long Island, and describes her childhood as “suburban bohemian.” Her parents split when she was three. “My mom left my dad not because he was a bad person, or wasn’t a good provider, but because she wanted to exercise her artistic freedom, and she was bored to tears,” Heirston says. Her mother, Victoria Heirston, eventually went to work for Grumman Aerospace as a senior buyer of parts, but was also involved in yoga, astrology, and theater, and had a circle of artistic friends.

At Yale, from which she graduated in 1986, Heirston’s initial interest was in theater studies. But the number of heavy hitters in the department proved daunting. “I remember Jodie Foster and a lot of other theater people who were very visible,” Heirston says. “I felt intimidated in classes.” she turned instead to art history, and decided to major in it. A course in art after 1970, she says, “was where the lightbulbs started to go off.” Her professor, Anne Gibson, would take the class to New York to see shows by such artists as Jim Dine, Chuck Close, and Julian Schnabel. At the end of her senior year, Heirston was offered an associate curatorship at the Baltimore Museum of Art, which she admits was something of a coup—“though at the time,” she claims, “the art world was still more flexible” about the lack of advanced degrees.

Heirston eventually decided she preferred the excitement of the gallery scene and petitioned Pace Gallery for an unpaid summer internship. “It was an unbelievable all-over experience,” she recalls. “I worked for the print department, I worked in the African art section.” From there, she went to Robert Miller Gallery, where she stayed for four years before moving to Stefan Stux, eventually becoming its director. “Stefan did an invitational every year, and so there were tons and tons of slides coming through, and in a weird way that honed my eye as to what stands out, what makes you want to see the real thing.”

By the early 1990s, the bottom was falling out of the art market. But, according to Heirston, what most affected her was what she perceived as “the intense lack of loyalty” on the part of artists toward galleries and vice versa. She began to sour on the gallery world. So when Italian collector Massimo Lauro wanted to start his own gallery and approached Heirston to become its director, she suggested instead that Lauro hire her to help build his own collection. What clinched the deal was a find for Lauro’s wife, Angela, who was interested in acquiring an important Peter Halley painting. Heirston, still working with Stux, tracked down a canvas in neon colors from the mid 1980s and sent details to the Lauros. They got back to her almost immediately. “Not only are we buying the painting,” Lauro told Heirston, “we want to hire you.” Two other advisers, it turned out, had offered the same painting (priced at about $75,000) but with fees inflated to 30 percent or more of the work’s value. (Heirston generally charges a 10 percent commission on the price of the work.) From that initial sale, she moved to scoop up a Damien Hirst formaldehyde sculpture at $40,000 (the Lauros were recently offered ten times that amount) and in 1992 a set of Cindy Sherman “Film Stills” for $10,000 (the Museum of Modern Art paid $1 million for an edition of the prints in 1995).

When Heirston first meets with clients, she attempts to gauge their knowledge about art, their tastes and needs (some are starting from scratch, some want to edit or add to a collection), and their budget. She might take novice collectors around to museums and galleries to assess their gut reactions, and then when it comes to making the actual purchase, she goes into overdrive. “We can look at a piece at 10 A.M.,” says Alex Clancy, “discuss it, continue to go around to galleries, and at 4 P.M. revisit the first work. She makes sure that you’re sure—she really wants you to love what you live with.”

Though her expertise is in art since 1945, Heirston’s great passion is for artists of the here and now. “I love it that I can call the artist up and ask, ‘What were you thinking when you were doing that, Julian?’” She is also interested in artists like Rachel Feinstein, Cameron Martin, and Charline von Heyl, but is wary of imposing her picks. She avoids assembling what she calls “cookie cutter” collections.

Though private collectors account for the bulk of her business, two of her bigger projects will be in the public realm. One is the Manhattan Mall, a complex of stores and offices on Sixth Avenue between 33rd and 34th Streets, recently acquired by Argent Ventures. The plan includes a food court with video art, murals on the interior walls, and a revamped atrium. The other project, still in the talking stages, is a 13-acre sculpture park, designed to complement a community of major-architect-designed houses in Sagaponack, Long Island, masterminded by real-estate developer Coco Brown.

A fair amount of furious socializing is a requisite part of the job, but Heirston tries to keep it in check. She begins her day around 5:30 with yoga exercises followed by a walk in the park with her yellow Labrador, Jasmine (a gift from a former boyfriend). Calls to Europe and combing through mail with her assistant come next, and then the afternoon is devoted to client business. She travels frequently to art fairs and biennials but tries to fit in one “mind-expanding” trip a year, she says. (Last year it was South Africa, before that, India.) When not working, she says she likes to read history and biography, although she recently became engrossed in the essays of Stuart Davis. “It’s all-encompassing,” she says, rolling her large brown eyes at the demands of her nonstop existence. “I’ll wake up in the middle of the night—having dreams about art.”