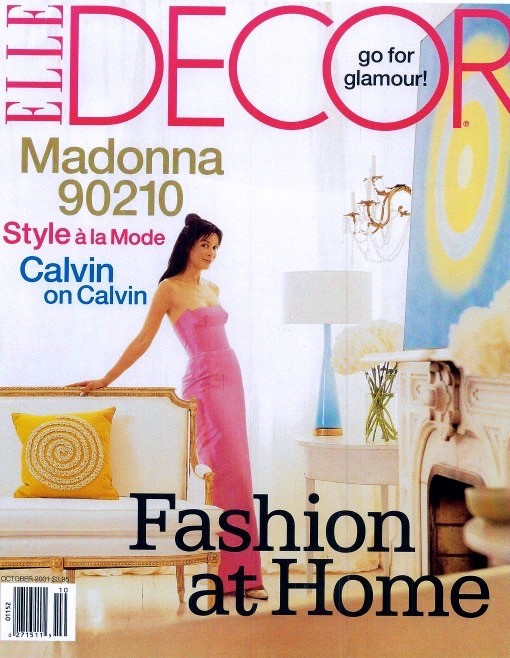 A hypnotic Kenneth Noland canvas, depicting concentric circles of blue and yellow, stares out from the mantel in Kim Heirston’s living room, a sexy supernova of color in a space notable for its creative use of white: bleached floorboards, creamy marble fireplace, chalky walls, and upholstery to match. “I want to show that you can have jarring contemporary art in an Upper East Side apartment with moldings,” says Heirston, who took that conceit one step further by adding everything from ancien-régime furniture to mirrored Modernism to her aesthetic blender.

Ah, but what about the minimalism of the recent past, when the art adviser rejoiced in a SoHo loft as bare as a surgical ward, a Richard Gluckman creation of poured-concrete floors and whitewashed walls? “It was a very austere way of living,” she says today, nostalgic and perhaps a bit chastened. Though her new home, a cozy apartment near Park Avenue, remains relatively restrained, “there is a little more color now, a little more whimsy.”

This time around, Heirston wakes to shell-white rooms whose walls pop with moments of Crayola brightness. A two-tone yellow scribble of oil stick on aluminum by Austrian artist Otto Zitko looms like a field of abstract wheat behind Louis XVI parcel-gilt chairs in the dining room (the lean white table was designed by a friend, antiques dealer Louis Bofferding). In the library, a scarlet Jorge Pardo canvas plays off the banquette’s scarlet cushions. Similarly bold works by Cindy Sherman and Otto Berchem are sprinkled throughout the sparely furnished rooms, each given an edge of romance with billowing silk-taffeta curtains and a glint of mirror (not to mention the presence of Jasmine, Heirston’s yellow Lab). It’s such a stylish percolation of objects and ideas—sensual but stern, luxurious but clearheaded, couture but T-shirt basic—that clients, seasoned collectors and novice buyers, turn to her for help in fine-tuning their own spaces. Example? Babywear designer Marie-Chantal of Greece, who called on Heirston and decorator Muriel Brandolini when it came time to furnish her Fifth Avenue apartment.

Art advising “is not simply about the selling process, although that is a component,” says Heirston, a towering, soft-spoken brunette who went into business in 1992 after graduating from Yale. “It’s about going out and looking at art in museums, about putting the work in context.” And though she claims that her raison d’être is to guide art lovers, not speculators, some of her picks have posted unexpectedly healthy rates of return (a Damien Hirst formaldehyde-tank piece purchased by a client in 1995 is now selling for ten times its original price). “Investment is not a bad word,” she quickly adds. “I’d certainly want any art I put into a collection to hold its value and ideally to increase it.”

And to reflect new modes of thought. Today, Heirston is fascinated by the growing relationship between art, architecture, and design as expressed by artists such as Pardo and Teresita Fernandez. “They’re referencing the process of design in their work,” she explains. “They’re even using designer colors, glossy enamel house paint, and both wooden veneers and Formica veneers in the vernacular of painting.”

Heirston’s own art collection is constantly rejuvenated with finds from her international sleuthing expeditions, including three works by Berchem, and artist she discovered at a recent Basel Art Fair. Reminiscent of The Dating Game’s floral motif, they now hang in her home office. And though she’s grown accustomed to the shots of color everywhere, from the limpid blue lamps in the living room to the chili-pepper-colored art-glass vessels on the dining table, don’t expect Heirston’s pearly lair to remain in a state of tranquility for long. “It suits my Gemini nature to shift and constantly mix and play,” she says with a smile. “That’s the fun part.”