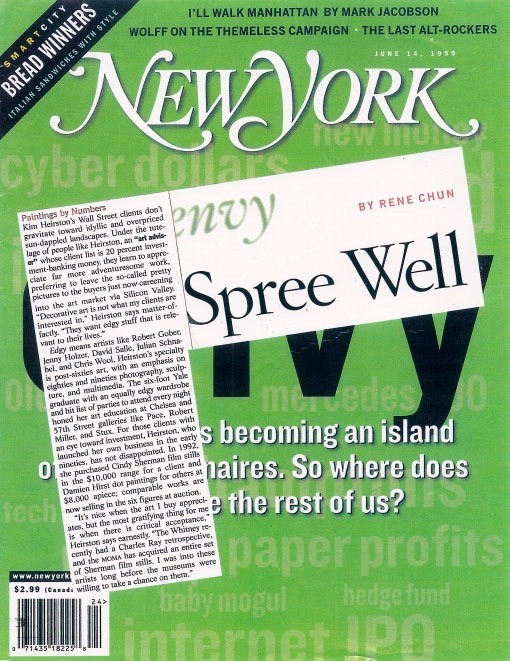 Kim Heirston’s Wall Street clients don’t gravitate toward idyllic and overpriced sun-dappled landscapes. Under the tutelage of people like Heirston, an “art adviser” whose client list is 20 percent investment-banking money, they learn to appreciate far more adventuresome work, preferring to leave the so-called pretty pictures to the buyers just now careening into the art market via Silicon Valley. “Decorative art is not what my clients are interested in,” Heirston says matter-of-factly. “They want edgy stuff that is relevant to their lives.”

Edgy means artists like Robert Gober, Jenny Holzer, David Salle, Julian Schnabel, and Chris Wool. Heirston’s specialty is post-sixties art, with an emphasis on eighties and nineties photography, sculpture, and multimedia. The six-foot Yale graduate with an equally edgy wardrobe and hit list of parities to attend every night honed her art education at Chelsea and 57th Street galleries like Pace, Robert Miller, and Stux. For those clients with an eye toward investment, Heirston, who launched her own business in the early nineties, has not disappointed. In 1992, she purchased Cindy Sherman film stills in the $10,000 range for a client and Damien Hirst dot paintings for others at $8,000 apiece; comparable works are now selling in the six figures at auction.

“It’s nice when the art I buy appreciates, but the most gratifying thing for me is when there is critical acceptance,” Heirston says earnestly. “The Whitney recently had a Charles Ray retrospective, and the MOMA has acquired an entire set of Sherman film stills. I was into these artists long before the museums were willing to take a chance on them.”