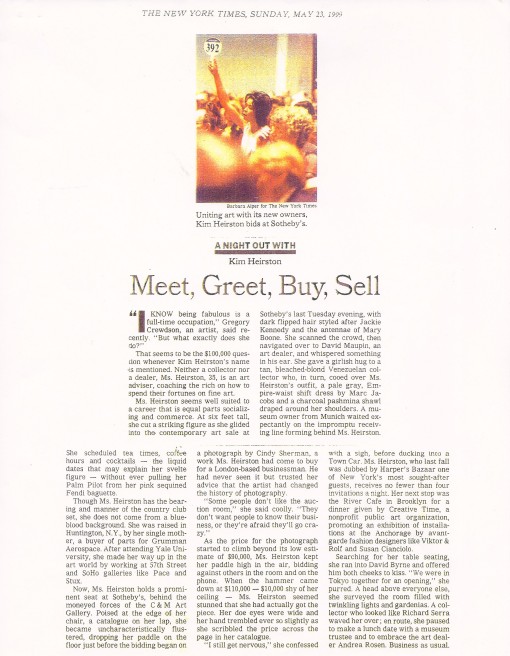 A Night Out With Kim Heirston

“I know being fabulous is a full-time occupation,” Gregory Crewdson, an artist, said recently. “But what exactly does she do?”

That seems to be the $100,000 question whenever Kim Heirston’s name is mentioned. Neither a collector nor a dealer, Ms. Heirston, 35, is an art adviser, coaching the rich on how to spend their fortunes on fine art.

Ms. Heirston seems well suited to a career that is equal parts socializing and commerce. At six feet tall, she cut a striking figure as she glided into the contemporary art sale at Sotheby’s last Tuesday evening, with dark flipped hair styled after Jackie Kennedy and the antennae of Mary Boone. She scanned the crowd, then navigated over to David Maupin, an art dealer, and whispered something in his ear. She gave a girlish hug to a tan, bleached-blond Venezuelan collector who, in turn, cooed over Ms. Heirston’s outfit, a pale gray, Empire-waist shift dress by Marc Jacobs and a charcoal pashmina shawl draped around her shoulders. A museum owner from Munich waited expectantly on the impromptu receiving line forming behind Ms. Heirston.

She scheduled tea times, coffee hours and cocktails – the liquid dates that may explain her svelte figure – without ever pulling her Palm Pilot from her pink sequined Fendi baguette.

Though Ms. Heirston has the bearing and manner of the country club set, she does not come from a blue blood background. She was raised in Huntington, N.Y., by her single mother, a buyer of parts for Grumman Aerospace. After attending Yale University, she made her way up in the art world by working at 57th Street and SoHo galleries like Pace and Stux.

Now, Ms. Heirston holds a prominent seat at Sotheby’s, behind the moneyed forces of the C & M Art Gallery. Poised at the edge of her chair, a catalogue on her lap, she became uncharacteristically flustered, dropping her paddle on the floor just before the bidding began on a photograph by Cindy Sherman, a work Ms. Heirston had come to buy for a London-based businessman. He had never seen it but trusted her advice that the artist had changed the history of photography.

“Some people don’t like the auction room,” she said coolly. “They don’t want people to know their business, or they’re afraid they’ll go crazy.”

As the price for the photograph started to climb beyond its low estimate of $90,000, Ms. Heirston kept her paddle high in the air, bidding against others in the room and on the phone. When the hammer came down at $110,000 – $10,000 shy of her ceiling – Ms. Heirston seemed stunned that she had actually got the piece. Her doe eyes were wide and her hand trembled ever so slightly as she scribbled the price across the page in her catalogue.

“I still get nervous,” she confessed with a sigh, before ducking into a Town Car. Ms. Heirston, who last fall was dubbed by Harper’s Bazaar one of New York’s most sought-after guests, receives no fewer than four invitations a night. Her next stop was the River Café in Brooklyn for a dinner given by Creative Time, a nonprofit public art organization, promoting an exhibition of installations at the Anchorage by avant-garde fashion designers like Viktor & Rolf and Susan Cianciolo.

Searching for her table seating, she ran into David Byrne and offered him both cheeks to kiss. “We were in Tokyo together for an opening,” she purred. A head above everyone else, she surveyed the room filled with twinkling lights and gardenias. A collector who looked like Richard Serra waved her over; en route, she paused to make a lunch date with a museum trustee and to embrace the art dealer Andrea Rosen. Business as usual.