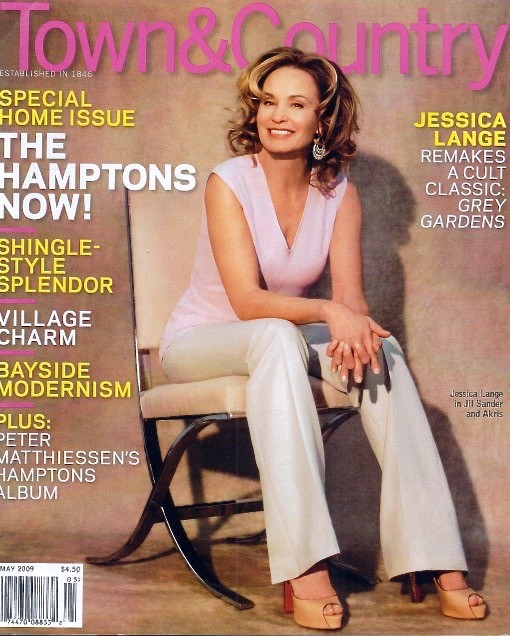 It may be tiny and tucked out of sight, but this house has had an outsized effect on its new owners.

“The irony is that neither one of us was even supposed to go to that party,” says Kim Heirston,
international art adviser, explaining to me from a poolside phone at the Hotel Bel-Air how she met her husband. We’ve been trying for some time now to have an extended conversation, but she’s hard to pin down and over the past few weeks has been in Paris, Moscow, New York and Miami, and today it’s Los Angeles, though only for a day before she and said husband, Richard Evans, continue on to Australia.

Tall and strikingly self-possessed, Heirston makes an impression on any continent, whether she’s attending a museum opening, negotiating a sale in a gallery’s back room or bidding at auction on behalf of one of her clients. She speaks in rapid bursts of high-energy lingo, and her enthusiasm is infectious. “Richard was a breath of fresh air,” she continues long-distance. “He had this big smile.”

They danced all night and lay in a hammock “canoodling,” according to Heirston, at the 2004 summertime party. When Evans asked her what her astrological sign was and she said Gemini, he said, “Oh, no!” and confessed his was the same. “Two Geminis! Twins!” They laughed so much, they almost fell out of the hammock. A few months later, the two New Yorkers were walking in Central Park when Evans, an entertainment lawyer turned property investor, blurted out, “You want to get married in Italy next week?” (He confesses it was one of his cornier lines, but it worked.) “That would be wonderful,” she replied. Evans found a Web site called gettingmarriedinitaly.com, and by the end of October they had done just that, in the Umbrian town of Città della Pieve.

The challenge for Heirston and Evans, both perpetual travelers, was how to be in the same place long enough to forge a lifelong relationship. They thought a new house might provide a promising start. Within a year they had found a modernist escape pod in Bridgehampton, New York, that would become the locus for their shared vision, a spot in which to slow down and grow together.

The two-bedroom dwelling is perched, ever so lightly, on a one-acre site overlooking Mecox Bay. Nestled inconspicuously among the native growth of shadberry, beach plum and wild roses, it is hardly visible from the road or even from the water. “It had an incredible location and this island feel about it,” explains Evans.

“I thought it was the coolest house I’d ever seen,” says Heirston, who imagined herself sitting on the deck, sipping a cocktail, even though it was the middle of winter and the ground was covered in snow. “When I see artwork, something happens, and it’s almost physical. I tend to appreciate things in terms of aesthetics and not practicalities.” It was the same with their house. “This was a genius place,” she recalls. “It had a grandeur and theatricality that belied its size.”

They both fell in love with the property, and they bought it in early 2006. “My immediate impression was that this was a real modernist gem, and I wanted to preserve it as it was,” says Evans, who started to research the house and found that its provenance was as interesting as that of any of his wife’s art acquisitions.

Built in 1968 for a New York City scientist, the couple’s new home was designed by Horace Gifford, an architect whose work has largely been overlooked but who created more than fifty small and elegantly restrained beach houses throughout the Hamptons and on nearby Fire Island in the sixties and seventies. Gifford’s dwellings were all variations on the same geometric theme: basic glass boxes with roofs that were either flat or sloped, butterfly-style, and arranged in a staggered series, set back from a dune, or in a pinwheel configuration around a central sun court. While tiny by today’s standards—the average size of a Gifford beach pad was only 1,100 square feet—his houses always featured large windows and expansive decks that made them feel much bigger. “The site,” wrote Gifford of his process, “usually suggests what the house wants to be as a form in space.”

Heirston and Evans’s quintessential beach getaway keeps very good company on the East End. Within a stone’s throw are several other important examples of postwar modernism by Peter Blake, Julian and Barbara Neski, Ulrich Franzen, Philip Johnson, Andrew Geller, Charles Gwathmey and Norman Jaffe, all proof that the area was a laboratory for architectural experimentation at the time. These modest houses shared a lyricism determined in large part by their carefree pre-McMansion agenda—think cookouts, bodysurfing and bunk beds, not the hypersocial networking that can make a modern-day Hamptons weekend as calming as a Manhattan traffic jam. (Summer living in 1968 was much simpler than it is now). And while Heirston and Evans do not exactly don overalls or hand in their cell phones when they arrive for an extended summer weekend, they are able to relax and shed some of the angst that characterizes their hectic lives. The dwelling’s size and proximity to nature force the two, in a sense, to abandon the city and return to basic pleasures: reading, chatting, lying in the sun and swimming (They both grew up near the ocean—Heirston on Long Island; Evans in Perth, Australia—and both love to swim.)

The house is understated in the most subtle of ways: it’s a wood-framed box, stretched and cantilevered over its foundation at either end with glassed-in overhangs that rest on steel I beams. “When you jump at one end, the other end bounces,” says Evans. But this is also what gives the place its sense of untethered lightness, akin to a boat drifting on the bay. The entry, tucked inside a small courtyard, is shaded by a screen of vertical cedar slats that creates a dark teahouse effect. (The courtyard, which has symmetrical concrete walls and Japanese pines, was designed by Ward Bennett and added in the early 1970s.) But as soon as you walk into the main living space, the view opens up and “you feel as though you’ve gone from outside to outside,” Evans says.

Between the living area, with its cedar-clad walls, and the water is an expanse of floor-to-ceiling glass. The view spills out beyond a sundeck to Mecox Bay. Clerestory windows span the perimeter of the room and fill the space with sea-flecked light. On one side is an open kitchen with a concrete-slab counter and a passage to a study-guest room; on the other is a dining area and, beyond it, the master bedroom and bath.

Heirston and Evans chose furniture and art carefully to complement the clean lines and breezy optimism of the house. They started off in a 1950s Scandinavian direction but then consulted with designer Joe D’Urso, who advised them to consider not just wood but also stone and other materials that would create more of a contrast with the cedar-lined interior. A low-lying Charlotte Perriand daybed from 1950, purchased from Cristina Grajales, a Manhattan dealer who specializes in 20th-century furniture, looks as if it had been designed specifically for its sunset position in front of the big window in the main room. Nearby are a fuzzy goatskin rug and two Mies van der Rohe chairs, a stone coffee table and two custom-made chaises flanking a fireplace, above which hangs a large-scale photograph by Louise Lawler. The dining table, a 1960s Karl Springer design made from a hefty slab of off-white marble, sits beneath Gary Webb’s New York Split (2006), a mirrored wall piece that bounces fractured reflections around the room.

For the bedroom, the couple chose an Arne Jacobsen Egg chair and stool, a Tommi Parzinger sunburst mirror that hangs over the bed, and a seductively comfortable chaise longue (called Listen to Me) by Edward Wormley. This is where Heirston likes to sit on quiet weekends and read her art books.

“My idea of kicking back is plowing through an artist’s monograph,” Heirston says. “I get such a high when I take in knowledge because so much of the time I’m holding forth.” But sometimes it’s enough for her to just sit here and gaze out at the water. Nothing else. There are fewer expectations here, fewer nagging doubts. “We get up in the morning and watch the swans glide up to our deck. It’s the ultimate chill pad. We go to detox. It’s my dose of sunshine: happy, open and nature driven.”

While Manhattan continues to be their year-round base, the house has become soul renewing during the months of July and August, as well as weekends in the fall. For the immediate future, the couple plans to make only basic improvements: replace some windows, repair cedar paneling and decking. Meanwhile, their friend the landscape designer Edwina von Gal has begun to clear the property and restore the natural vegetation around it.

“We might expand the house one day, but if we do, we’ll make an effort to do something in the spirit of Gifford’s original design philosophy,” says Evans. “This is all anyone really needs,” he concludes. “It’s this sexy little Miesian pavilion right on the water. The proportions are perfect.”